The 2015 FRCP Amendments: 'Tis the Season 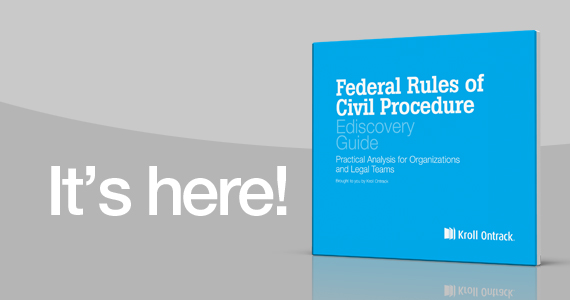 Hoping to find the perfect gift for the ediscovery professional in your life? Look no further than the 2015 Amendments to the Federal Rules of Civil Procedure (FRCP).

The FRCP Amendments Are Here

Significant changes to the FRCP affecting the legal discovery of ESI become effective on December 1, 2015. At the heart of the amendments is a renewed effort to provide judges and lawyers with practical tools to help move the discovery process along and keeps costs in control. The amendments, including revisions to Rules 1, 16, 26, 34, and 37, are intended to provide new guidelines on the scope of discovery and the spoliation of ESI while emphasizing the need for proportionality and cooperation between parties.

Now, more than ever, both counselor and client will need to familiarize themselves with the rules changes and prepare for their impact on discovery. Kroll Ontrack has a new guide on the FRCP amendments, which provides the text of the major rules amendments and the accompanying Committee Notes. It also examines their impact on key ediscovery rule provisions, along with analysis for organizations and their legal teams.

Active case management is a prominent theme throughout the amendments to Rule 16. The reduction of time for courts to issue a scheduling order and the bolstering of the meet and confer aim to reduce delays at the outset of litigation. This will make early case assessment even more important. Parties should know where their data lie and on what data sources, what types of data are implicated, and how data will be reviewed and produced. The amendments also allow for a more inclusive scheduling order, where courts are empowered to address preservation of ESI, clawback agreements under Federal Rule of Evidence 502, and a required discovery conference before either party moves for a discovery order.

A major headline from the 2015 amendments is the deletion of the “reasonably calculated to lead to the discovery of admissible evidence” language in Rule 26(b)(1). In its place, the new Rule 26 emphasizes that parties may obtain discovery of non-privileged information, including ESI, that is both relevant and proportional to the needs of the case, and lists relevant considerations in determining whether discovery is proportional.  While the new Rule 26 eliminates an often cited basis for allowing virtually unlimited discovery—the “reasonably calculated” language—it remains unclear as to the extent the new rule will limit the scope of discovery.

The new Rule 26 also allows for delivery—not service— of discovery requests prior to the meet and confer, with the intent of relaxing the existing “discovery moratorium” and to facilitate more meaningful discussion during the Rule 26(f) conference. Allowing early Rule 34 requests for production demonstrates a coordinated effort among the amendments for the need for greater urgency to get discovery issues worked out early before collection, review, and production.

The new Rule 34 aims to limit any confusion in regard to production obligations and objections to requests for production. As mentioned above, the Rule is amended to align with new Rule 26 to deliver early discovery requests. Amended Rule 34 also requires that objections to Rule 34 requests must be “stated with specificity,” with the likely effect of broad and boilerplate objections no longer allowed in discovery disputes. Further, the new Rule 34 requires that an objection must also include whether any responsive materials are withheld on the basis of that objection, with the intent to prevent misleading objections which leave the requesting party in the dark about whether information is nonetheless being withheld after a partial production.

The amendment to Rule 37(e) completely replaces the previous version, and addresses and resolves a historical split among the Federal Circuits concerning the level of culpability required to issue severe sanctions, including adverse inferences, for failing to preserve ESI. The most serious sanctions will only attach when there is proof of an “intent to deprive” a party of the use of ESI in the course of the matter.  The Committee Note clarifies that “reasonable steps to preserve suffice; it does not call for perfection,” but mentions that proportionality, including consideration of the parties’ resources, will be a factor when evaluating the reasonableness of preservation efforts. The “reasonable steps” test is designed to encourage responsible and targeted preservation and retention efforts.

To find more analysis and impact of these amendments, download your copy of the Federal Rules of Civil Procedure Ediscovery Guide: Practical Analysis for Organizations and Legal Teams.  It’s the perfect gift for those tough-to-shop-for ediscovery professionals (and it’s free!).