My (Google) Hangout with the Ediscovery Experts 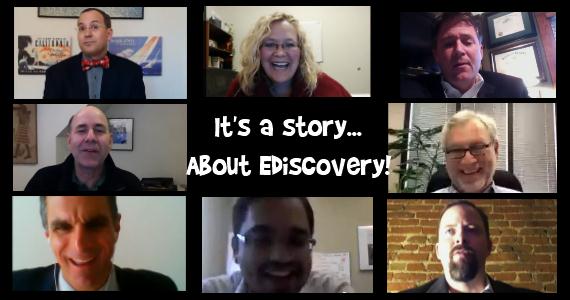 What happens when seven of the smartest, most articulate ediscovery professionals come together for an hour talk about—quite frankly—whatever they want?

Just yesterday  Josh Gilliland, Samir Mathur, Barry Murphy, Ralph Losey, George Socha, and David Horrigan joined my esteemed co-moderator Phil Favro and myself —virtually—for a Google+ Hangout on the current state of ediscovery. The discussion was loosely framed on three topics: case law, predictive coding, and FRCP amendments, and the perspectives shared (as you may expect from this forward-thinking group) were anything but canned.

Topic One: Case Law – This no-nonsense panel wasted little time cutting to the bone with an important and seldom-raised question: Just how much weight does a trial decision from Judge Scheindlin, the “grandmother of ediscovery,” really pull?

On one hand, practitioners and other courts are leveraging cases like Sekisui to start thinking about how to handle issues like spoliation, but as another panelist pointed out, the principles of stare decisis fully apply—moreover, Scheindlin often restricts her holdings to her court room, as no one judge controls preservation.

“Are new rules the answer?” pressed another expert. Preservation law has existed for around 400 years, so maybe the answer doesn’t lie in creating a new framework, but in using the tools we have today more effectively.

In a statement that was shared by most, one lawyer noted that “[Preservation has] always been about reasonable efforts and it always will be”—and what’s reasonable in one jurisdiction will differ from what’s reasonable in another. The bottom line hasn’t changed: these are fact-based determinations, and courts will find a way to sanction people who intentionally delete evidence.

On the issue of whether or not new rules would help, one member of the group concluded this topic by noting that “[W]e’ve been dealing with sanctions since Roman times, and that rules alone are probably not the end-all, be-all solution.”

Topic Two: Predictive Coding – Where do we stand right now in the adoption of this technology, and what will 2014 look like? Is this a mainstream technology? Will it ever be?

Fairly universally, the panel agreed with the notion that predictive coding has yet not totally taken off. “Even if X% of clients have used it, they aren’t using it in all of their cases because not all cases are right for this technology. Moreover, it has yet to be embraced by smaller firms,” as one panelist noted.

But at the very same time, another panelist fired back, “you’d be foolish” to not use it in the mega cases. Now that we have judicial approval—notably more than we ever had for keyword searching—he  expects the discussion about predictive coding to mature, and the more interesting prospective discussions will be about the appropriate methodologies required to successfully deploy this software.

Another panelist argued that we’re going to see more opacity—yes, the opposite of clarity or clearness—in using this technology in 2014. There are ramifications tethered to agreeing to share testing and seed sets, and litigants will begin to carefully examine whether this is the right direction for using these solutions.

Most professionals agreed with the statement that lawyers are at the “tip of the tail on the dog” with regard to predicting coding technology. However, as noted by one attorney, as this technology continues to become less costly, and integrated into more review solutions, its usage should trickle down to the smaller firms.

Topic Three: Potential Amendments to the Federal Rules of Civil Procedure – Before wrapping things up, the group analyzed potential FRCP amendments currently on the table for public comment until early next year, specifically changes to FRCP 26 and 37.

To get the ball rolling, one participant opined that the renewed interest being injected into the 26(f) meet and confer conference obligation—“the lynchpin of successful discovery”—is a step in the right direction. Another countered, however, “there is only so much you can do to force people to get together and cooperate early.” This point was further echoed across the panel: there must be also be a parallel culture shift in how lawyers approach cooperation. Whether this will actually happen is an entirely different question.

While there was fairly universal agreement that the potential changes to the Federal Rules were positive additions to ediscovery law, especially with regard to bringing proportionality clearly into parent Rule 26, there was some hesitancy as to just how “game-changing” these rules will be. Addressing proposed rule 37, one expert noted that the culpability triggers defined by this rule will probably not significantly alter the current spoliation analysis.

On the whole, most participants agreed that the vehicles for shifting ediscovery costs are too limited. Section 1920 (4), which allows prevailing parties to recoup fees for “exemplification” and “making copies,” must be reworked in one way or another, as it’s the only place to currently hang one’s hat. Concluding the discussion, one expert stated it’s hard to stretch a statute, which has been around for over 100 years, to accommodate requests for costs associated with increasingly necessary ediscovery processes.