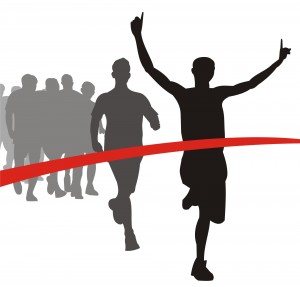 To many of you, the last Bank Holiday might have been a bit of a washout; a non-event. There was plenty of rain to water the garden but not enough sunshine to enjoy any time there. In Mother Nature's fuse box, the switch marked 'Summer' was most definitely turned to 'Off'.

I expect (as seems to be the norm these days) that most people would have been checking their smart phones or tablets every five minutes, shopping around for the best weather forecast in order to decide whether to wear sandals or galoshes.

So it wouldn't surprise me if only a few of you realise how that very same weekend was a busy junction of 'historic events' (I use the term loosely because some of them, as you will soon learn, are peculiar to my own experience and really just facilitate the writing of this blog).

This is what I had on my mind:

Whether or not you are pleased with your results, it is always important to reflect on the reasons for your performance. Personally, I can't fathom how I managed to shave 45 seconds off my previous best mile and over 6 minutes on the 10k. I wonder if (training aside) it had anything to do with some ediscovery issues that got me....well....a little worked up on both days.

The first was the matter of a short-sighted comment that I heard during my travels through Europe in the week leading up to the Westminster Mile.

I was told by a lawyer that they would never use predictive coding technology to review documents because the DOJ doesn't accept it. Shortly before 4am on the morning of the race, I woke in my hotel room with these words ringing in my ears. Whether the DOJ accepts it or not, I just couldn't believe that someone would write off technology that could save time, labour and cost, without considering how they could use it to gain advantage (after all, there are many situations where it is sorely needed and it's use does not need approval from the DOJ or any other opponent). Anyway, a quick tweet seemed to be the remedy for this bout of insomnia and feeling much better, I managed to get some more sleep ahead of the race.

At breakfast I could see from the window (instead of the BBC Weather app) that it was raining heavily and I was thankful that this would dampen the pollen sufficiently to ensure that I could run reasonably fast and still have good lung power for the longer race the next day. I was mostly keen to ensure that I didn’t exhaust myself to rule out getting a decent time in the long race.

Despite my concern, I found that the going was definitely good. I started well; I got ahead of the rest of my fellow runners and went for it. I even slowed a little to make sure that I maintained a good pace and convinced myself that I would not beat last years’ time of 7 minutes and 2 seconds. So much so that I was very surprised to hear the commentator’s voice announcing through the loud-speaker at the 200 metres marker that anyone finishing now would be just outside of 5½ minutes. After the surprise, I realised there lurked another analogy to ediscovery technology and how it surpasses expectations when proper control is exercised.

But why so fast? Was I still fired up by one person’s ignorance? Was it my breakfast (an unhealthy and calorific Full English)? Or did it have something to do with the inclusion of the Spencer Davis Group’s classic hit “Keep On Running”, the lyrics to which I had already changed in my head:

Keep on running, keep on hiding / One fine day I'm gonna be the one / To make you understand / Oh, yeah, [I'm gonna be your] Predictive Coding man

Did my time, took my chances

The danger of Twitter is that it is very difficult to compose something intelligent and all too easy to compose something controversial in just 140 characters. I discovered this after the first race when I found that someone had vehemently disagreed with my earlier tweet.

But, where there's danger, there's excitement. Having clarified what I meant, I found that the excitement comes in being able to engage with like-minded people around the world, who share the same passion for improving legal practice through the use of technology. In the words of Survivor (which kept me going between the 7th and 8th kilometres on the day of the long race) “risin’ up to the challenge of [my] rival” had made me feel much better.

At the end of both races I decided that integrity, honesty and skill is what wins races (more than mild aggravation, bacon and music), which brings me to another topic that has been on my mind.

The Governor of the Bank of England recently commented that "integrity, honesty and skill" in senior managers are not optional. He was targeting the financial services industry, but I think that this is a further sign of a high-standards culture of compliance in Europe that will eventually prevail in all industries and sectors.

The key thing to take away from Mr. Carney’s warning is that if your business is going to come under scrutiny, you have an opportunity to get ahead of the probe. And if there a probe is on the horizon, you have an opportunity to get ahead of the curve to investigate yourselves. As a company you should know what your liability is early and deal with it. Which brings me back to technology, and my final plug for it –if you are worried about what the DOJ (or the FCA for that matter) have to say, then use the best technology out there to root out the problem before they knock on your door.