Is there a Worm in your Apple? 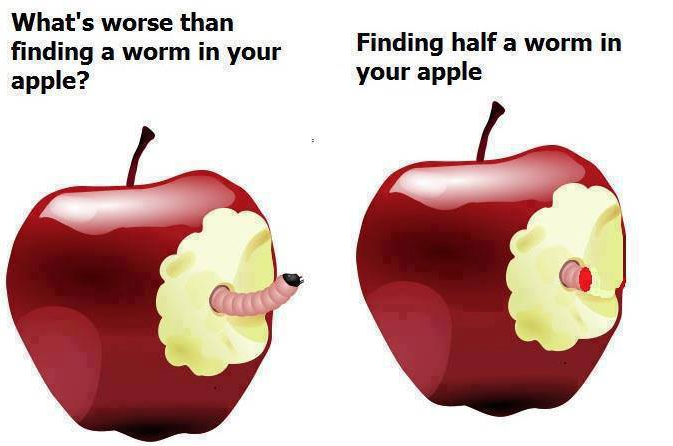 There is a commonly held belief that it is harder for a Mac to become infected by Malware than it is for a Windows PC, a belief that has been peddled by Apple itself as in this advertising campaign of a few years ago.

Is this advert telling the truth?

Well yes, it is true that Apple viruses are extremely rare, however the reasons from this are not as clear cut as Apple would like the consumer to think. As is usual with such claims, the truth is not just that Apple devices have supercomputer immunity to all viruses and computers running Windows are coughing, spluttering, germ factories.

So why don’t Apples get viruses?

The UNIX based system incorporated into Mac OS X is undoubtedly reliable and resistant to an attack from a “virus” (i.e. malware that is capable of copying itself) but not immune from them. In fact the Morris Worm, the very first worm ever distributed by the internet took advantage of vulnerabilities in Unix.

But if viruses can and have been designed for Unix, why do Macs remain (so far) relatively unaffected by viruses, whereas Windows has the plague?

This undoubtedly comes down to rational economics. Viruses are not cheap to produce; they require significant time and skill to create. The virtual monopoly that Windows enjoys in the commercial computer market has made it the primary target for every hacker this generation has produced. Until a short time ago Apple devices were almost solely reserved for the creative industries and education, their high cost precluding them from businesses requiring more than a few machines and the majority of households.

So where do we stand today?

You would have had to have been living on another planet not to notice the influx of Apple devices in the last few years. If Apple were a country it would have the 65th biggest economy in the world and be bigger than Ecuador. But if we look at the market share for Desktop Operating Systems, then you will see below that despite increasing its share in the last few years Apple is still only a small part. 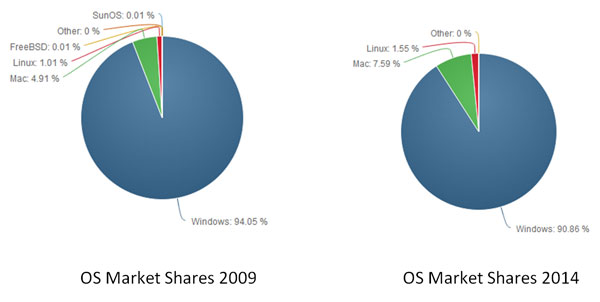 Therefore we must consider that if a generation of hackers have grown up coding viruses for Windows machines and Windows still has a 90% share of the desktop OS market, why should we expect a significant increase in the prevalence of malware for Macs?

Well not quite, as above we have shown that remains unlikely for a Mac to be infected by a “virus”, however this is only one type of malware and as the title suggest Macs are not immune to “worms”, “Trojans” or “spyware”. All these forms of malware can survive in the Mac environment, however they will not self-replicate.

There will certainly be a direct correlation between the prevalence of Apple products and the prevalence of malware aimed at those devices. However most of these will still require some unwitting assistance to make their way on to your device.

So what should I do?

All normal precautions should be taken with Macs as they are with Windows PCs. Don’t download counterfeit software or pirated files, be wary of unsolicited links in emails, especially when they come from friends or contacts and make sure passwords are sufficiently complex to make them difficult to crack or guess.